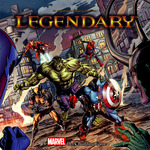 Legendary Deck Building Game is one of the most sought after and fun games on the market.  In the game, players recruit  hero cards  to add to their deck  in order to become more powerful. Players build their recruitment power by enlisting more heroes and fight villains by building up  their fighting ability. Heroes are recruited by players from a stack of six cards.  Player’s reveal a villain and add it to the row of villains at the start of their turn. There are only a limited number of spaces in this row, and if it fills up, The villain that arrived first escapes and can punish the heroes in some way.